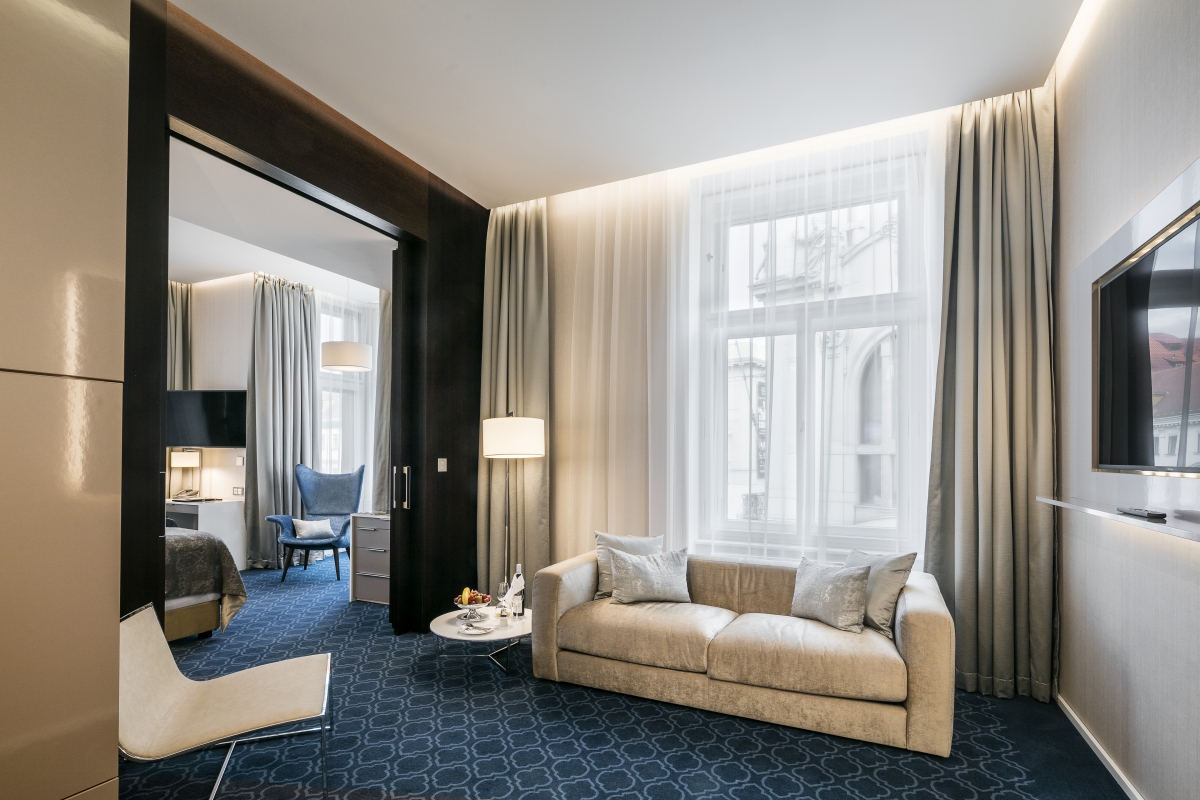 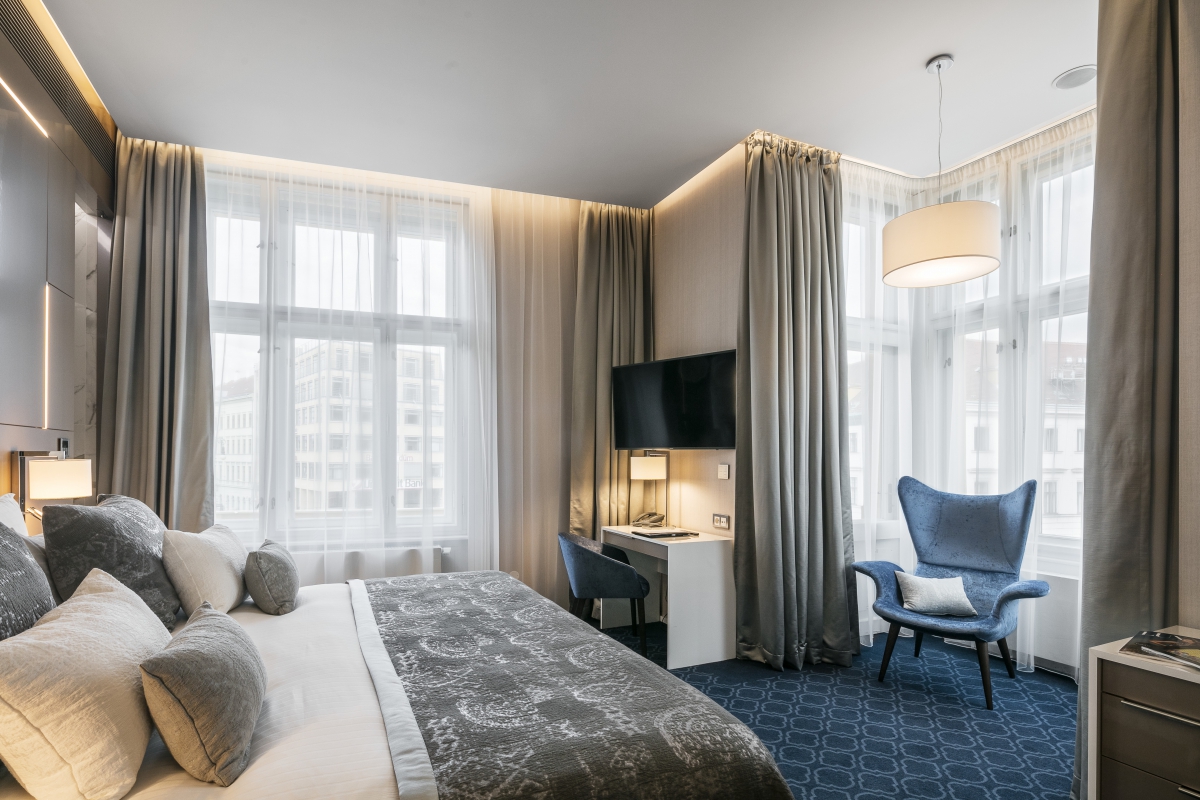 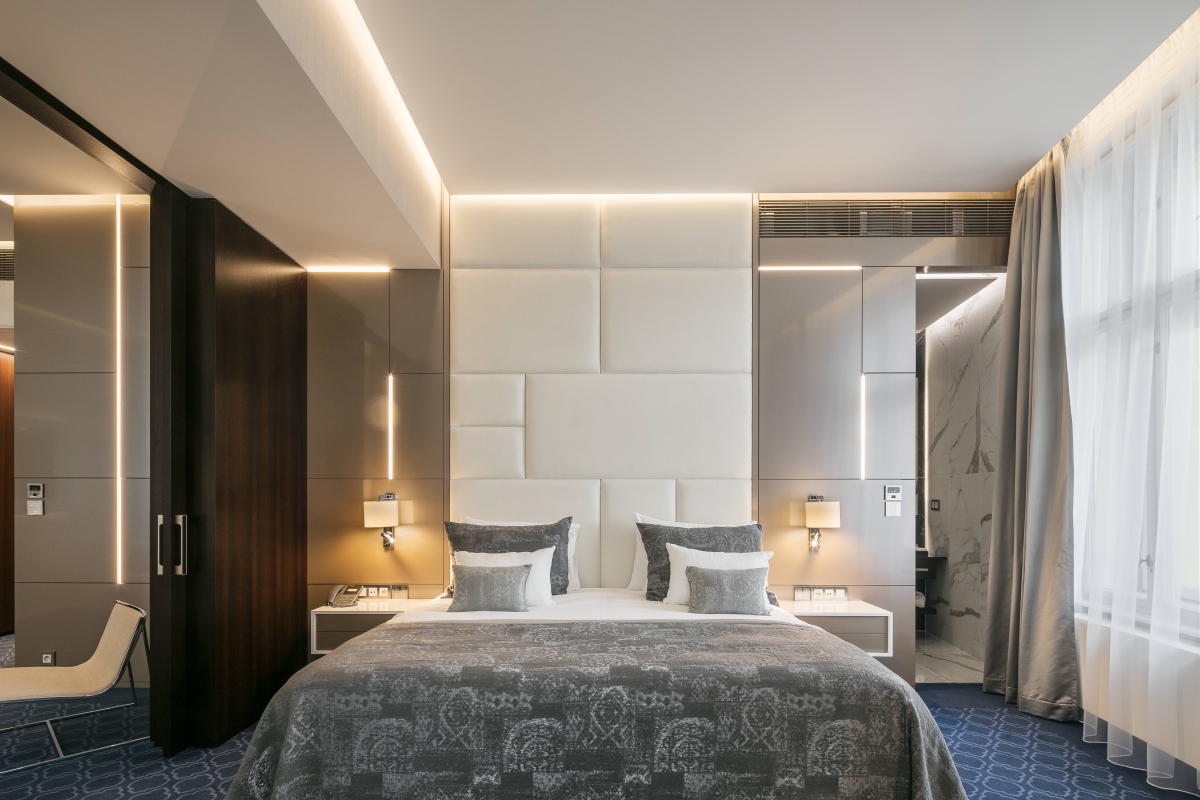 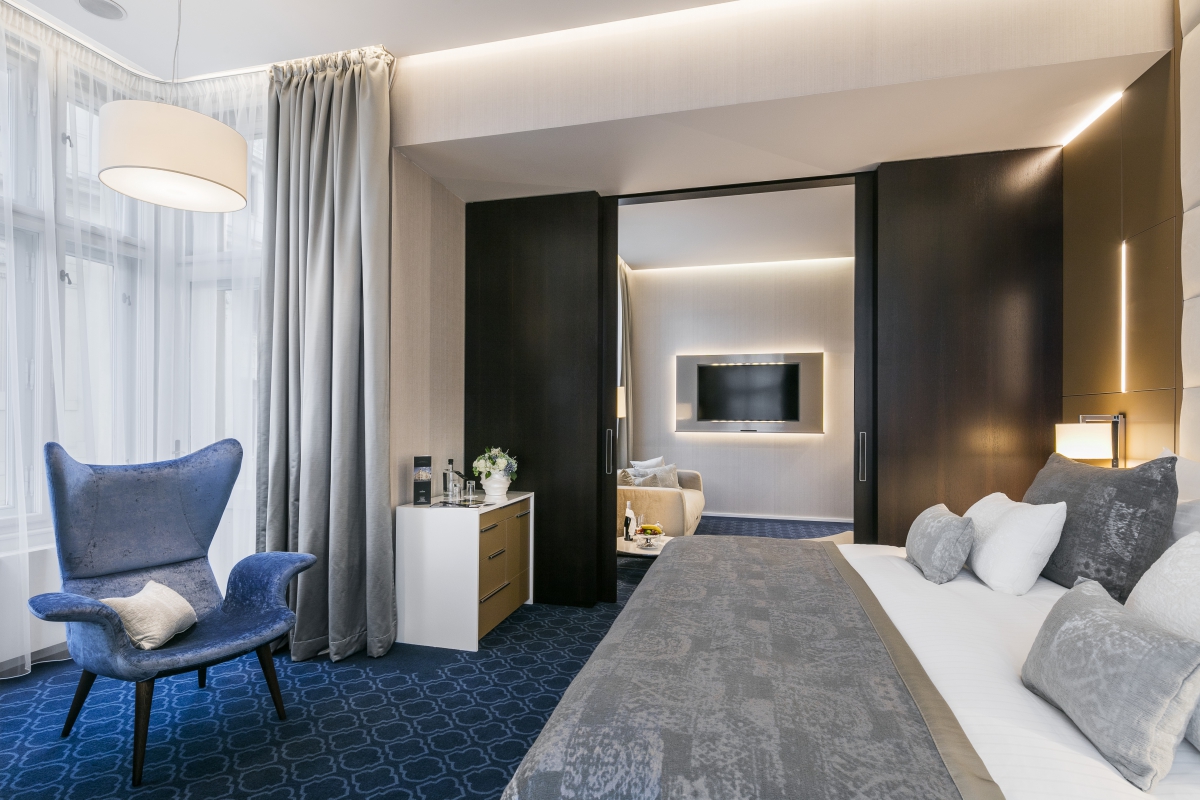 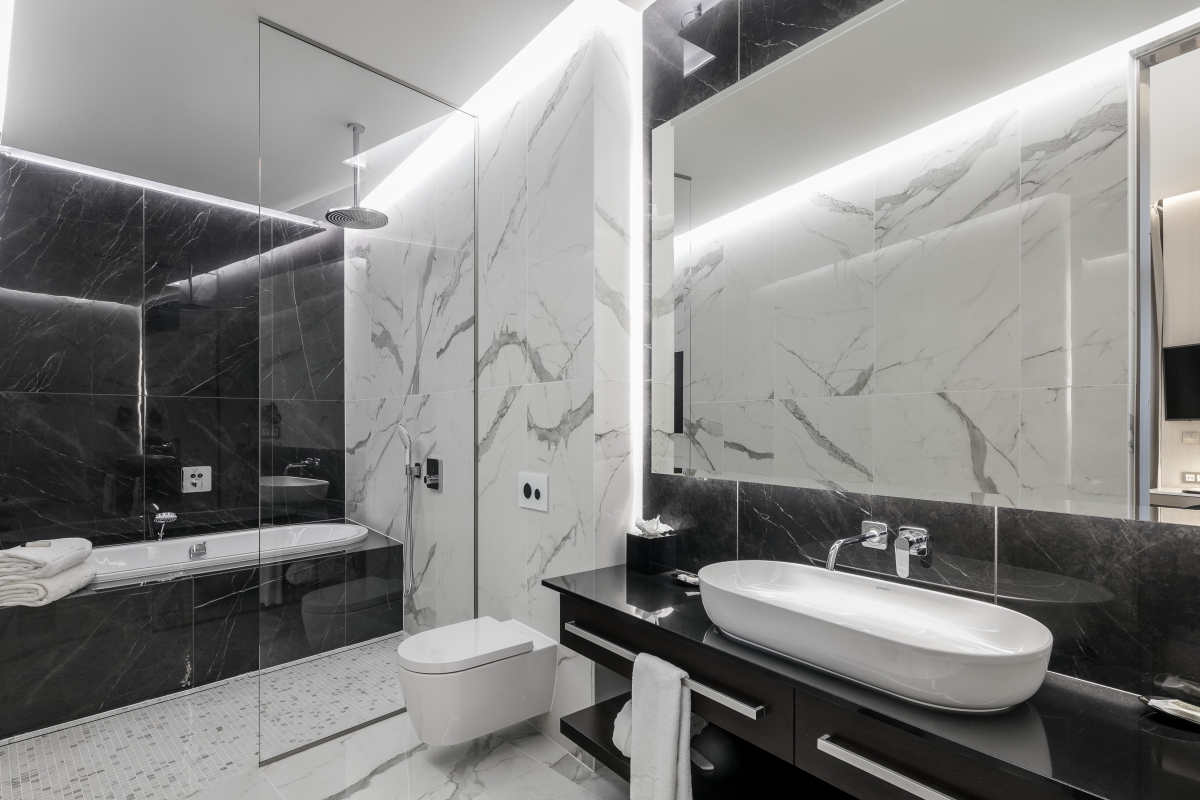 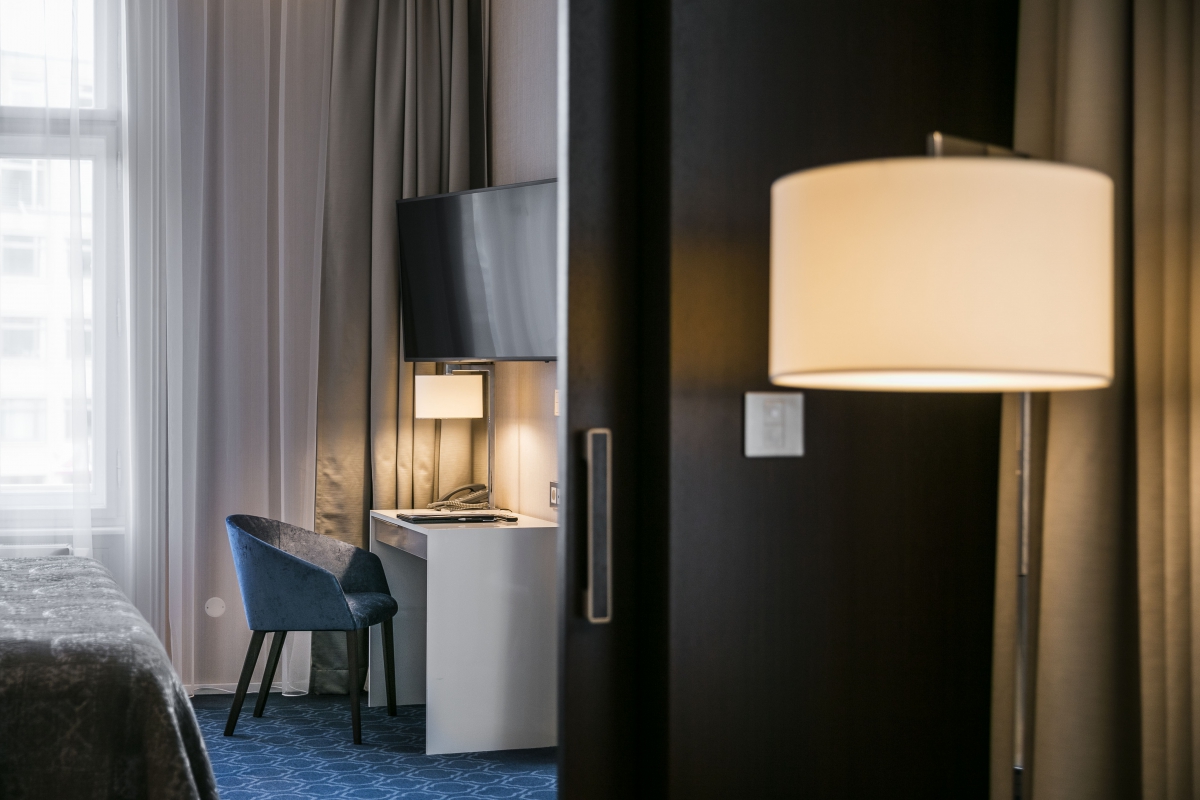 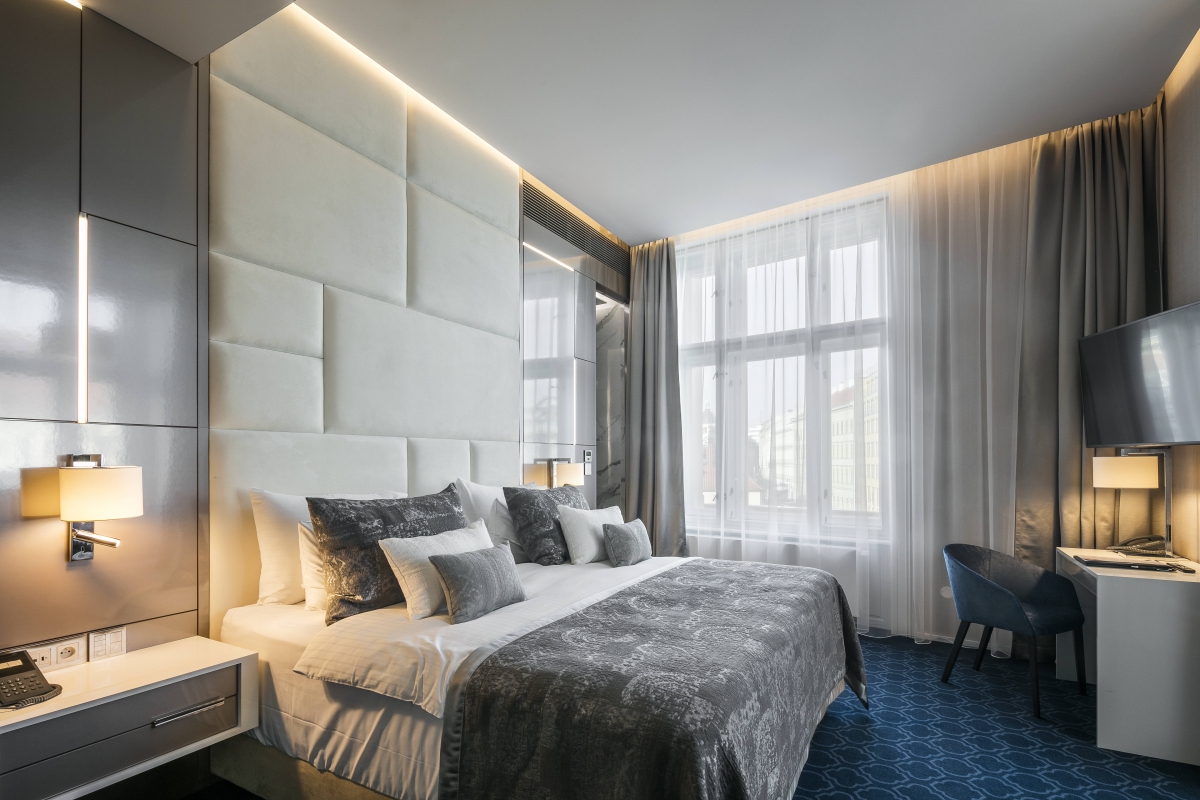 Our atelier CAMA is cooperating with Hotel Kings Court on Náměstí Republiky in Prague for a long time. Owners of the hotel are sometimes inventing very strange tasks.
The hotel reconstructions are in general very time-consuming and demanding because the hotel is still working and guests can´t be disturbed by the construction. In this spirit were reconstructed also tower apartments or wok restaurant in this hotel.
A new apartment in the former place of lounge bar was a less challenging challenge and we focused more on interior design.
The apartment is situated at the corner on the 3rd floor of Hotel Kings Court. Fine windows and the balcony have a nice view of the Náměstí Republiky and you can see the Municipal House there.
Our design was based on dividing the space as little as possible and letting the exterior views stand out. Compared to that, the original idea of the investor was to have here two separate rooms and two bathrooms.

We chose the wallpapers of light colors and the bathroom was finally placed near the central wall. The sleeping zone is separated from the day zone by a dark veneer wall with a double sliding door. For the main bathroom, we chose an all-glass door.
The furniture is light and is matching together with the whole space (including textile accessories or the glass tiling). The color feeling is induced by a carpet made to measure, distinctive armchair, and chair.
In bathrooms, you can find ceramic large format tiling in two contrasting colors of marble.
Around the perimeter of the rooms are installed diffused indirect lighting embedded in the negative join. The night atmosphere is made by classic hotel lamps supplemented by linear LED stripes integrated into the geometrically divided wall.
We want to thanks a lot to owners and managers of the hotel and to suppliers Fabrick, Lachman joinery, Konsepti, Habitat, and Astro lighting.
According to this apartment was renovated all of the 123 hotel rooms in Hotel Kings Court.